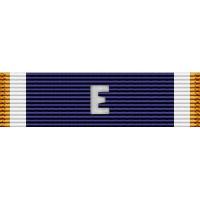 Ribbon Unit With E For Efficiency

A Secretary of the Navy recommendation in June of 1976 established this award to replace the Battle Efficiency Award (the letter "E") which had been worn sewn to the sleeve of the uniform. It is authorized to be worn by all crew members of ships and aviation squadrons winning the fleet-wide eighteen month competitive cycle which has exercises testing all phases of battle readiness. The Battle Efficiency Award, called the Navy Battle "E", in addition to the ribbon, consists of a cloth insignia and a battle pennant to be displayed by the ship or unit winning the award.
Price:
$2.17